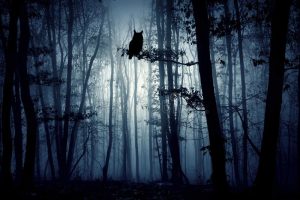 ‘Is there anybody there?’ said the Traveller,

Knocking on the moonlit door;

And his horse in the silence champed the grasses

Of the forest’s ferny floor:

And a bird flew up out of the turret,

Above the Traveller’s head:

And he smote upon the door again a second time;

‘Is there anybody there?’ he said.

But no one descended to the Traveller;

No head from the leaf-fringed sill

Leaned over and looked into his grey eyes,

Where he stood perplexed and still.

But only a host of phantom listeners

That dwelt in the lone house then

Stood listening in the quiet of the moonlight

To that voice from the world of men:

Stood thronging the faint moonbeams on the dark stair,

That goes down to the empty hall,

Hearkening in an air stirred and shaken

By the lonely Traveller’s call.

And he felt in his heart their strangeness,

Their stillness answering his cry,

While his horse moved, cropping the dark turf,

’Neath the starred and leafy sky;

For he suddenly smote on the door, even

Louder, and lifted his head:—

‘Tell them I came, and no one answered,

That I kept my word,’ he said.

Never the least stir made the listeners,

Though every word he spake

Fell echoing through the shadowiness of the still house

From the one man left awake:

Ay, they heard his foot upon the stirrup,

And the sound of iron on stone,

And how the silence surged softly backward,

When the plunging hoofs were gone.

I love The Listeners by Walter De La Mare.  I love contemplating the questions this poem evokes:

To answer these questions would destroy the mystery and beauty of the poem.  They are better left unanswered.

The Listeners also calls forth feelings of isolation, loneliness, and anxiety.  Such feelings are not unknown to those of us in the arts.

How much we artists are like The Traveller in this poem.  We wander alone through the deep, dark, mystical and mysterious Forest of Creativity.  We keep our commitments, and hope that someone is listening.