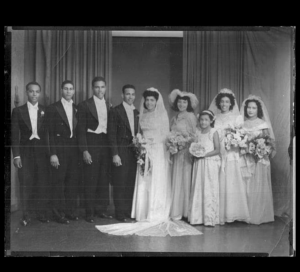 I was supposed to attend the wedding, but Minnie and Chic did not feel safe because I was not vaccinated.  The other issue was that I was not born yet.  Not being born made going anywhere a challenge.  I decided not to go.

Growing up, I never saw Minnie and Chic argue.  If they had arguments, then they did not have them around their children.

Some of my friends talked about how their fathers drank and beat their mothers.  It was not unusual to see their mothers with bruises and black eyes.  I felt blessed that Chic did not drink, and that he would never hit Minnie or any other woman.

A few cracks occurred in the tranquility of Minnie and Chic’s marriage with an empty nest after Chic retired.  He was home all the time.  They had arguments, but none were serious.

Minnie died in 2002 after 55 years of marriage.  Chic was devasted.  He was alone.  He missed Minnie.  At one point he said, “I hated driving your mother to go shopping.  Now I would give anything to have her back so I could drive her, go shopping with her, and be with her.”

Losing Minnie caused Chic to lose his mind.  He stopped eating properly, doing laundry, and bathing.  When Minnie was alive, she cooked their meals, did the laundry, and was forever after Chic to bathe more often.  Unable to care for himself, Chic ended up in a nursing home.  He reunited with Minnie in 2005.  And, to the best of my knowledge, they have been together ever since.